In the year 2000, while still attending College studying music, Shawna felt the call to move to Glendale, Arizona from Saint Louis, Missouri.  She met Craig, who was her  coworker at a local video store in Glendale.

Mutual friends became more and Shawna invited Craig to attend her Vocal recital at Glendale Community College.  Craig was enamored and wanted to share his guitar/vocal songwriting with Shawna after the concert.  This was their first date and you can see that music has been the forefront of their relationship.
Shawna and Craig have played in weddings and have been in various bands together, performing at local venues in the Phoenix area.  Even performing on the radio and at larger venues outside of Phoenix, all the while sharing their love for music with students throughout the valley.

In 2007, they began Morbyus Music, a traveling music lesson company providing in home lessons and after school programs for students  from Scottsdale to Goodyear and everyplace in between.
After having 2 adorable children, the two decided that the time spent traveling was taking away from the 2 blessings at home!  They opened up Surprise Academy of Music in 2017.
Surprise Academy of Music operates like a down home mom and pop shop because Craig and Shawna have a strong desire to serve their community through the talents that God has given them; Music!

In addition to teaching music, the Morby family is very active in Church and shares their gifts and talents with their church. The Morby family understands and values families.  When you attend lessons at Surprise Academy of Music, you become one of the family!  We celebrate with you!  We laugh and cry with you. We pray for you!

Welcome Home!
You are family! 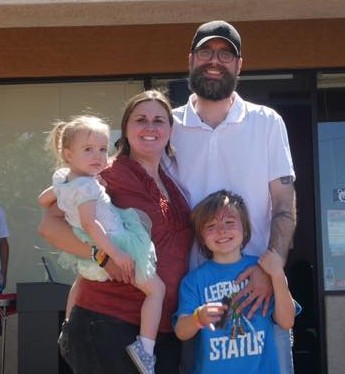 IT'S EASY TO TAKE THE NEXT STEP

Just reach out to get all of your questions answered.

Sign-up is simple and easy. Our staff will help walk you through the entire process and help you pick a day, time, and teacher that is perfect for you. Our lessons are month to month, so there is no long-term commitment.

Lessons are first come, first served, so contact us today to get started!